Growing Up Lucky: A Young Magician's Travels in the American Civil War (Hardcover) 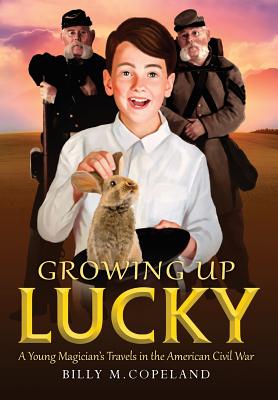 Growing Up Lucky: A Young Magician's Travels in the American Civil War (Hardcover)

When nine-year-old James Michael "J.J." Willard finds himself bumping along in a covered wagon, with his father, mother, two sisters and all their worldly possessions, he has no idea of the adventures that lie ahead. His folks had immigrated from Ireland a few years earlier and now the whole family is on the move again, leaving their home in Brooklyn, New York, making their way south to New Orleans, lured by the promise of work. They stop in townships along the way to sell "Willard's Magic Elixir" - an old family recipe - in order to buy food for their journey. The year is 1861 and the war between the states is just beginning. Arriving in New Orleans they are confronted with the full horrors of the civil war, and to avoid being caught up in the brutal conflict the family decides to lie low on a small farm outside the city where they brew their potion and work on their sales patter. They decide to incorporate a few simple conjuring tricks to entertain the crowd and quickly discover that J.J. has a natural gift for performing magic. By the time the war is over the Willards are putting on weekly magic shows in New Orleans and J.J. is the star of the show. Offers start pouring in and before long the talented young magician is performing on Mississippi riverboats and famous clubs all over the United States. Then Europe beckons...But what magic can he conjure up when misfortune stikes his family at home? These are the adventures of a young man who grew up lucky at a time of great conflict and against all odds...based on the true life adventures of James Michael "J.J." Willard.