The Emperor of Evening Stars (The Bargainer) (Paperback) 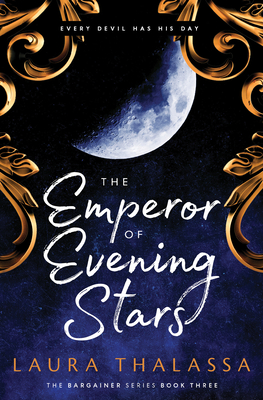 The Emperor of Evening Stars (The Bargainer) (Paperback)

From bestselling indie author Laura Thalassa comes the newly revised and edited third book in her smash-hit dark fantasy romance between a siren and the "bargainer" she owes countless favors to.

In the beginning, there was darkness.

Before he met his soulmate, Callypso Lillis, and before he became the Bargainer or the King of Night, he was just Desmond Flynn, the bastard son of a scribe. A boy born to a weak mother in a lowly city, cursed with little magic, and destined to marry a slave. A boy taught to hide his truths from the realm of Night…and from himself.

But fate had something else in mind.

In an instant, Des loses everything, and his life becomes newly defined by a quest for revenge. From the barren caves of Arestys to the palace of Somnia to the streets of Earth, Des journeys to places he's only ever read about to destroy the king who shattered his fragile life in the shadows. What he finds will change him forever. Between the threads of fate, the business of bargains, and a centuries-long quest to find his mortal soulmate, this is how a fairy who began with nothing but darkness becomes the Emperor of Evening Stars.

Laura Thalassa is the author of over a dozen paranormal and fantasy romance novels. She fell in love with stories as a child and decided she never wanted to escape them. She lives in sunny southern California with her husband and children. When not writing, she can be found reading about lost civilizations, splashing with her kids in the Pacific, and hoarding chocolate for the apocalypse.