Immigration Reform: The Corpse That Will Not Die (Paperback) 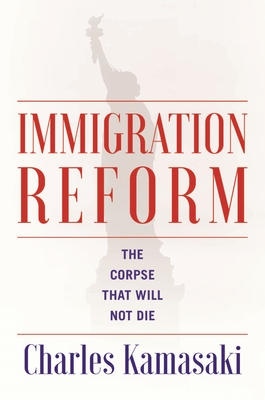 Immigration Reform: The Corpse That Will Not Die (Paperback)

2019 Finalist for INDIES Book of the Year

This book is an insider's history and memoir of the battle for The Immigration Reform and Control Act of 1986: its evolution, passage, impact, and its legacies for the future of immigration reform. Charles Kamasaki has spent most of his life working for UnidosUS, formerly the National Council of La Raza (NCLR), the nation's largest Hispanic civil rights and advocacy organization. He was a direct participant in the many meetings, hearings, mark-ups, debates, and other developments that led to the passage of the last major immigration reform legislation, The Immigration Reform and Control Act of 1986 (IRCA). He reveals the roles of key lawmakers and a coalition of public interest lobbyists that played a role in opposing, shaping, and then implementing IRCA. His account underscores the centrality of racial issues in the immigration reform debate and why it has become a near-perpetual topic of political debate.

Charles Kamasaki is a Senior Cabinet Advisor and senior member of the management team of UnidosUS, formerly the National Council of La Raza (NCLR), the nation's largest Hispanic civil rights and advocacy organization representing 300 affiliated community organizations that serve millions of Hispanic Americans annually. He previously managed NCLR's research, policy analysis, and advocacy on civil rights, education, and immigration. He has authored, co-authored, and supervised the preparation of dozens of policy and research reports, journal articles, and editorials, testified at congressional and administrative hearings, and represented NCLR at research and policy conferences. He was educated at Baylor University and Pan American University.