The Long Blink: The True Story of Trauma, Forgiveness, and One Man's Fight for Safer Roads (Paperback) 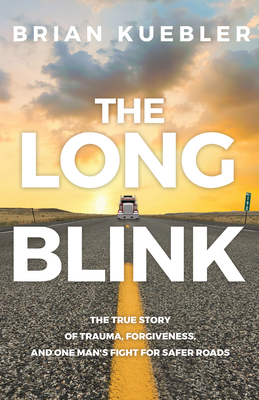 The Long Blink: The True Story of Trauma, Forgiveness, and One Man's Fight for Safer Roads (Paperback)


Not On Our Shelves—Ships in 1-5 Days
THE LONG BLINK is a narrative nonfiction book by Emmy Award-winning journalist, Brian Kuebler, who exposes the staggering cost of the American trucking industry's rising crash rate through the intimate struggle of Ed Slattery, who is left to piece his family back together after a trucker fell asleep at the wheel and killed his wife and maimed his son. From the historic, public settlement with the trucking company and a bizarre confrontation with its driver to one father's ongoing and, more recently, frustrating fight on Capitol Hill for safer roads, the Slattery's story is a revealing, emotional look at the rapidly growing danger we all face from the passing lane each and every day.
Brian Kuebler is an award winning investigative journalist for WMAR-TV in Baltimore, Maryland. Kuebler has been a television reporter for 18 years. He has written, published, and broadcast thousands of stories in his career and has risen to become a lead investigative reporter in one of the nation's major media markets. Kuebler has won three Edward R. Murrow Awards, the world's largest professional organization devoted to electronic journalism. One of Kuebler's Murrow awards was for his coverage of the Slattery family trying to heal one year after the crash. The author is also an Emmy award winner. In 2011 Kuebler was recognized for telling the original story of Ed Slattery and his family. Kuebler received the Emmy for the best serious feature that year as he profiled the crash that killed Susan Slattery and explored how trucking regulations may have played a role. In addition to winning an Emmy in 2011, Kuebler has been nominated most every year for his work. He has been nominated in categories of writing, investigative journalism, serious feature and in light feature a total of 12 times in 8 years. Most recently the author was awarded best enterprise reporting by the Associated Press Broadcaster Association for his exclusive story featuring the first and only interview of an officer accused in the death of Freddie Gray in Baltimore. Brian Kuebler is a graduate of the University of Maryland, College Park where he completed a Bachelor of Arts in Journalism. He also holds a Masters Degree in Journalism from the University of Missouri, Columbia. Kuebler has been a reporter in Idaho, Missouri, Memphis, Tennessee and Baltimore, Maryland. During his career he developed a hard news narrative style of storytelling that resonates with viewers and readers. Through every market he has worked, Kuebler has risen to be the lead reporter covering most of the large complex news stories, several of which have been of national interest through the years.