At Home in the World: Stories and Essential Teachings from a Monk's Life (Hardcover) 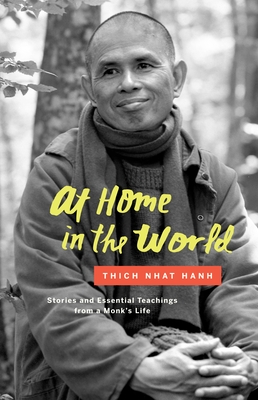 At Home in the World: Stories and Essential Teachings from a Monk's Life (Hardcover)


Special Order—Subject to Availability
"Followers and newcomers to Nhat Hanh’s teaching alike will find this collection inspiring for everyday practice and for social engagement in the world."—Publishers Weekly

This collection of autobiographical and teaching stories from peace activist and Zen Master Thich Nhat Hanh is thought provoking, inspiring, and enjoyable to read. Collected here for the first time, these stories span the author’s life. There are stories from Thich Nhat Hanh’s childhood and the traditions of rural Vietnam. There are stories from his years as a teenaged novice, as a young teacher and writer in war torn Vietnam, and of his travels around the world to teach mindfulness, make pilgrimages to sacred sites, and influence world leaders.

The tradition of teaching the Dharma through stories goes back at least to the time of the Buddha. Like the Buddha, Thich Nhat Hanh uses story–telling to engage people’s interest so he can share important teachings, insights, and life lessons.
THICH NHAT HANH is one of the most revered and influential spiritual teachers in the world today. Born in Vietnam in 1926, he became a Zen Buddhist monk at the age of sixteen. Over seven decades of teaching, he has published more than 100 books, which have sold more than five million copies in the United States alone. Exiled from Vietnam in 1966 for promoting peace, his teachings on Buddhism as a path to social and political transformation are responsible for bringing mindfulness to the West. In 1982 he established the international Plum Village Community of Engaged Buddhism in France, now the largest Buddhist monastery in Europe. He lives in Hue in Central Vietnam.
"Thich Nhat Hanh shows us the connection between personal inner peace and peace on earth."—His Holiness the Dalai Lama
For This Book...
Staff Pick