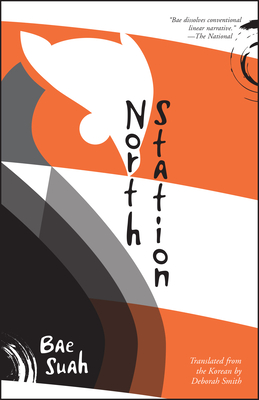 Bae dissolves conventional linear narrative, as though it were impossible for cause and effect to exist concurrently with such repression. --Joanna Walsh, The National

A writer struggles to come to terms with the death of her beloved mentor; the staging of an experimental play goes awry; time freezes for two lovers on a platform, waiting for the train that will take one of them away; a woman living in a foreign country discovers she has been issued the wrong ID.

Emotionally haunting and intellectually stimulating, the seven stories in North Station represent the range and power of Bae Suah's distinctive voice and style, which delights in digressions, multiple storylines, and sudden ruptures of societal norms. Heavily influenced by the German authors she's read and translated, Bae's stories combine elements of Korean and European storytelling in a way that's unforgettable and mesmerizing.

Bae Suah, one of the most highly acclaimed contemporary Korean authors, has published more than a dozen short story collections and novels, and has won a number of prestigious awards. She has also translated several books from the German, including works by W. G. Sebald, Franz Kafka, and Jenny Erpenbeck. Her novel Nowhere to Be Found was longlisted for the PEN Translation Prize and the Best Translated Book Awards.

Deborah Smith has translated two other books by Bae (Recitation and A Greater Music) and won the Man Booker International Prize for her translation of Han Kang's The Vegetarian. She is the founder of Tilted Axis Press.

Bae Suah is one of the most highly acclaimed contemporary Korean authors, with over ten short story collections and five novels to her name. She received the Hanguk Ilbo literary prize in 2003, and the Tongseo literary prize in 2004. She also translates from the German.Deborah Smith's literary translations from the Korean include two novels by Han Kang (The Vegetarian and Human Acts), and two by Bae Suah (A Greater Music and Recitation). Smith won the Man Booker International Prize for her translation of The Vegetarian. Recently, she founded Tilted Axis Press to bring more works from Africa, Asia, and the Middle East into English.