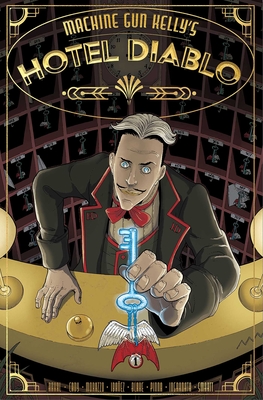 
Not On Our Shelves—Ships in 1-5 Days
Machine Gun Kelly revisit his 2019 album Hotel Diablo as he makes his debut in the world of comics!

Between Heaven and Hell lies a waystation for the soul--a place where your deeds in life are the keys to your eternity in the afterlife--at the Hotel Diablo. And it's Lydia Lopez's first night behind the front desk. Every guest's got a story to tell and a lesson to learn...
Co-written by film and music superstar Machine Gun Kelly with Eliot Rahal (Archie Comics) and Ryan Cady (DC Comics). Art by Martin Morazzo (Ice Cream Man) and a host of talented illustrators.

Amilcar Pinna is a freelance illustrator and comic artist.