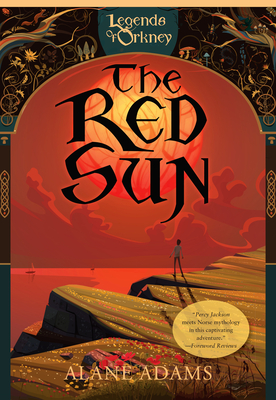 This is book number 1 in the Legends of Orkney series.

2017 Moonbeam Children's Book Awards: Gold Medal, Best Book Series - Chapter Book 2016 International Book Awards: Fiction: Young Adult Finalist 2015 USA Best Book Awards: Best Cover Design: Fiction, Winner 2015 USA Best Book Awards: Children's Fiction, Winner Beverly Hills Book Award: Best Juvenile Fiction, Winner BPA Benjamin Franklin Awards: Best New Voice Children's/Young Adult, Silver Medal Readers Favorite Awards Children Preteen: Silver Medal Winner
Sam Baron is about to get the shock of his life. First his substitute English teacher claims to have turned his old teacher into a lizard; then a strange dwarf named Rego arrives and claims Sam is from a magical realm called Orkney. When his friends are taken prisoner, it's up to Sam to save them. Sam embarks on a journey to Orkney through a stonefire to find his friends--but when he arrives, he discovers that an ancient curse has turned the sun a poisonous red and threatens to destroy the land. With only a young witch girl to guide him, Sam must choose: save his friends, or stop the red sun from consuming the land? Drawing on Norse mythology, The Red Sun follows Sam's journey to uncover the truth about his past--a journey during which he has to overcome the simmering anger inside of him, learn to channel his growing magical powers, and find a way to forgive the father who left him behind.