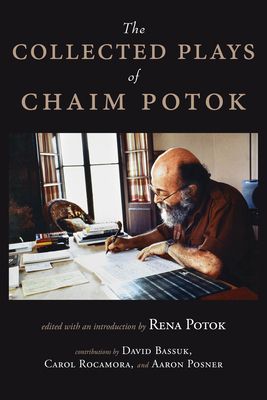 While Chaim Potok is most famous for his novels, particularly his first book The Chosen (1967)--which was listed on The New York Times bestseller list for 39 weeks and sold more than 3,400,000 copies--he also wrote plays, which are collected and published here for the first time. Rena Potok edited the collection and wrote the introduction. This book features all five of Potok's plays, production notes on each of the plays, prefaces by the directors, and the transcript of a post-performance discussion on Out of the Depths featuring Chaim Potok and Prof. David Roskies, which appears for the first time in print, in this volume.

Out of the Depths (Performed in Philadelphia in 1990. The last version was a 1990 video of the staged workshop performance. The play was reconstructed for this collection by Rena Potok and David Bassuk, the play's director and co-creator, based on the video and on the final rehearsal script.)

Sins of the Father: The Carnival and The Gallery (Performed in Philadelphia in 1990. Adapted from scenes in Chaim Potok's novels The Promise and My Name is Asher Lev.)

The Play of Lights (Performed in Philadelphia in 1992. Adapted from Chaim Potok's novel The Book of Lights.)

The Chosen (Premiered in 1999 and performed widely since then. Adapted from the novel of the same name into a play by Chaim Potok and Aaron Posner. This volume contains the most recent authorized version of the play.)