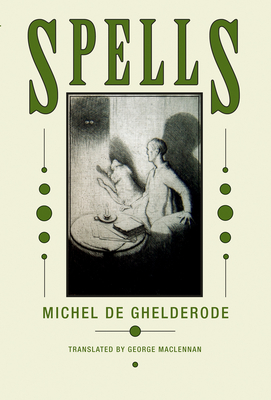 
Not On Our Shelves—Ships in 1-5 Days
Hitherto unavailable in English, Spells, by the Belgian dramatist Michel de Ghelderode, ranks among the 20th century's most noteworthy collections of fantastic tales. Like Ghelderode's plays, the stories are marked by a powerful imagination and a keen sense of the grotesque, but in these the author speaks to us still more directly. Written at a time of illness and isolation, and conceived as a fresh start, Spells was Ghelderode's last major creative work, and he claimed it as his most personal and deeply felt one: a set of written spells through which his fears, paranoia and nostalgia found concrete form. By turns mystical, macabre and whimsically humorous, and set in the unsettled atmosphere of Brussels, Ostend, Bruges and London, Spells conjures up an uncanny realm of angels, demons, masks, effigies and apparitions, a twilit, oppressed world of diseased gardens, dusty wax mannequins and sinister relics. Combining the full contents of both the 1941 and 1947 editions, this translation of Spells is the most comprehensive edition yet published. Michel de Ghelderode was born in Brussels in 1898. After nearly a decade of penning fiction, drama, literary journalism and puppet plays, in 1926 he began to write almost entirely for the theater and the following ten years saw the creation of most of his major plays. After 1936 he suffered from poor health and his involvement with the theater diminished. In the later 1940s, performances of his plays in Paris sparked a major awakening of interest in his work. Ghelderode died in 1962; the interior of his apartment, packed with books, pictures, puppets and masks, has been reassembled in Brussels as the Mus e-Biblioth que Michel de Ghelderode.