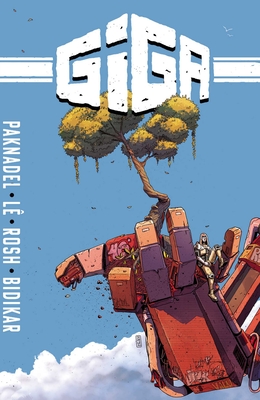 
Coming Soon—Pre-Order Now
Ever since their world-shattering war ended, the slumbering mecha called 'Giga' have been both gods and habitats for the surviving humans. Then disgraced engineer Evan Calhoun discovers a murdered Giga, and the very fabric of society stars unraveling around him.

Nobody knows why the skyscraper-sized mechs known as ‘Giga’ fought their bitter, centuries’ long war. All they know is that when the fighting finally stopped, the dormant Giga became humanity’s new habitat and new gods in one. When disgraced engineer Evan Calhoun finds an apparently murdered Giga, his society and the fascistic tech-centered religious order that controls it are rapidly thrown into chaos..
From writer Alex Paknadel (Friendo, Turncoat, Incursion) and rising star John Le comes another Vault & White Noise partnership about what happens after the mechs stop fighting.

Alex Paknadel is a writer and academic from London, England. His first comics work, the dark sci-fi thriller ARCADIA from Boom! Studios, met with critical acclaim and led to additional projects with a range of publishers including VAULT COMICS (GIGA), Marvel Entertainment, Valiant Entertainment, Lion Forge, and Titan Comics. He is also a founding member of White Noise Studio alongside fellow writers Dan Watters, Ram V, and Ryan O'Sullivan.

Aditya Bidikar is a comics letterer based in India. His recent work includes The White Trees, Little Bird, Bloodborne and These Savage Shores, among others.

https://www.instagram.com/adityabidikar/
"GIGA...imagines  a future where humans make their homes in the husks of mysterious massive robots and it's smart, thought-provoking gorgeous stuff."
— Scott Snyder

"I read GIGA the other day and fell  desperately in love with the world they build, and was desperate to spend more time in it and explore. You do NOT want to miss it."
— James Tynion IV