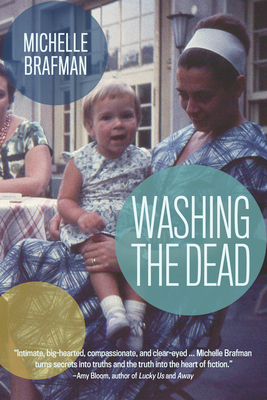 
Special Order—Subject to Availability
"Intimate, big-hearted, compassionate and clear-eyed, Brafman's novel turns secrets into truths and the truth into the heart of fiction." --AMY BLOOM, author of Lucky Us and Away "From roots in one religious tradition, comes a tale of emotional redemption for all of us. Michelle Brafman's astonishing compassion for all human frailty infuses this story about the need for truth and the promise of forgiveness." --HELEN SIMONSON, author of Major Pettigrew's Last Stand "Heartfelt and genuine, Washing the Dead never betrays the complicated truths of family and tradition."
-- DAVID BEZMOZGIS, author of Natasha and Other Stories and The Betrayers "Like a Jewish Anne Lamott, Brafman reels you in with warmth, depth and heart." --SUSAN COLL, author of The Stager and Acceptance Three generations of women confront family secrets in this exquisitely wrought debut novel that examines the experience of religious community, the perilous emotional path to adulthood, and the power of sacred rituals to repair damaged bonds between mothers and daughters.
Michelle Brafman grew up in Milwaukee, Wisconsin and now lives in Glen Echo, Maryland with her husband and two children. She is a graduate of the University of California, San Diego and Johns Hopkins University, where she now teaches fiction writing. Her award-winning short stories and essays have appeared in the Washington Post, Slate, Tablet, Lilith Magazine, Bethesda Magazine, Superstition Review, Potomac Review, minnesota review, Fifth Wednesday Journal, Gargoyle and elsewhere. A regular contributor to the Lilith Magazine blog, she has led its salon discussions at theaters and arts centers throughout the Washington, DC area. Brafman is also a former documentary filmmaker whose film American Lives: Jewish Stories, like her debut novel Washing the Dead, illuminates seldom told stories of the Jewish experience.