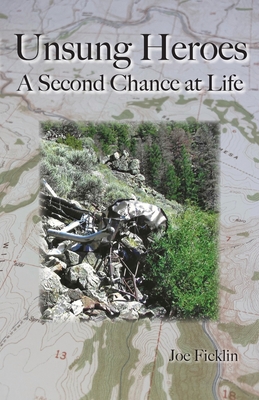 Joe Ficklin was having an ordinary day at a dangerous job. He was flying in a helicopter over the rugged San Juan Mountains of Southwest Colorado. He and three other men were doing survey work on December 30, 1961, at the top of the high cliffs of the Lake Fork of the Gunnison River. Having difficulty getting "lift" on the helicopter, they started searching for a place that even the helicopter could land when suddenly the helicopter drifted into a steep rocky slope and crashed. Their situation was desperate.

In his book about their desperate struggle to survive and the ordinary men who came to rescue them, Joe tells of the pain and suffering and of the heroism of men that came after them in the terribly frigid mid-winter at almost 8500 feet elevation. The crash was before the time of elite and well-trained mountain rescue teams. The rescue team consisted of ordinary men, every-day heroes who interrupted their personal lives to undertake the rescue, in torturous conditions, of other human beings who would die if not reached quickly.

Unsung Heroes is also the tale of the author's will to survive and, with the unwavering support of his new wife, Sandy, of his long, agonizing, and painful recovery. His life would never be the same again. This book was written, however, not to share his pain and suffering but to honor those men who rescued him and gave Joe a second chance at life. They were certainly the very definition of unsung heroes.

Beyond Joe's recovery and return to normal life, fate had in store one more sting for him and his wife.