The Drummer's Bible: How to Play Every Drum Style from Afro-Cuban to Zydeco (Paperback) 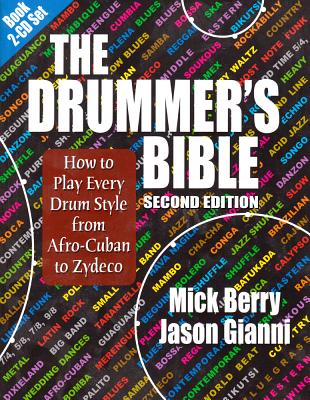 The Drummer's Bible: How to Play Every Drum Style from Afro-Cuban to Zydeco (Paperback)

Updated to include 50 additional grooves, this encyclopedic book and two-CD set contains more than 450 musical examples in standard notation, showing grooves and practical variations. Overviews of the history and development of almost all popular music styles are covered alongside innumerable helpful performance tips. The two accompanying CDs feature performances of nearly 200 of the grooves, including every primary style example, all performed both with and without a click track. Styles covered include blues, rock, jazz, reggae, country, klezmer, ska, samba, punk, surf, heavy metal, latin rock, and funk; virtually every style a performing drummer will ever need to play is in there. This revised second edition also includes an updated bibliography and discography, as well as more historical information about the individual styles.

Mick Berry has been playing drums for more than 30 years, and has toured in numerous bands across the United States, Canada, and Mexico. He has accompanied such renowned artists and groups as Henry Butler, Eddie Henderson, Michael Wolff, E. C. Scott, and the Spiral Starecase. He has written and performed three critically acclaimed one-man plays, and is currently performing his new one-man play, Keith Moon: The Real Me. He lives in San Francisco. Jason Gianni holds a master of music degree in percussion performance and is on the teaching faculty at the Drummer's Collective in New York City, the most prestigious drum school in the United States. He regularly gives clinics and workshops and has performed with the Trans-Siberian Orchestra, and members of Primus, Tower of Power, and Santana. His most familiar drum work is in opening theme song of the popular children's cartoon, Spongebob Squarepants, and has written for Modern Drummer magazine. He lives in New York City.

"Quite an undertaking, researched and written with care. . . . This 'bible' delivers some 400 notated drum grooves along with a historical perspective on each genre—noble and useful features indeed. It's comprehensive up to jungle/drum 'm bass and blas beats, and includes a recommended listening guide for further study. There's even klezmer, tarantella, odd-time over-the-bar polyrhythms, and something every drummer needs to know: how to play a proper Viennese waltz."  —Modern Drummer magazine, on the first edition

"One of the finest and most complete texts ever written. It has every possible rhythm listed and recorded on CD. I highly recommend it for every drummer."  —Louis Bellson, legendary drummer and author, Modern Reading Text in 4/4

"The amount of research that Mick Berry and Jason Gianni have done to write this book must have been absolutely colossal. It's the Encyclopedia Galactica of drumming."  —Simon Phillips, drummer for Toto, The Who, Mick Jagger, Jeff Beck, Stanley Clarke, Mike Oldfield, and Gil Evans

"A definitive guide to a multitude of styles, beats, and rhythms. . . . [It] prepares percussionists for the diverse challenges and complexities of today's many demanding musical genres."  —Mike Clark, drummer for Herbie Hancock, Michael Wolff, and the Headhunters