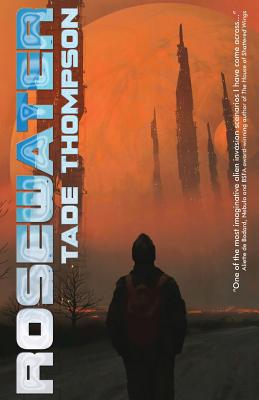 "One of the most imaginative alien invasion scenarios I have come across..."
--Aliette de Bodard, Nebula and BSFA award-winning author of THE HOUSE OF SHATTERED WINGS

Between meeting a boy who bursts into flames, alien floaters that want to devour him, and a butterfly woman who he has sex with when he enters the xenosphere, Kaaro's life is far from the simple one he wants. But he left simple behind a long time ago when he was caught stealing and nearly killed by an angry mob. Now he works for a government agency called Section 45, and they want him to find a woman known as Bicycle Girl.

An alien entity lives beneath the ground, forming a biodome around which the city of Rosewater thrives. The citizens of Rosewater are enamored by the dome, hoping for a chance to meet the beings within or possibly be invited to come in themselves. But Kaaro isn't so enamored. He was in the biodome at one point and decided to leave it behind. When something begins killing off other sensitives like himself, Kaaro defies Section 45 to search for an answer, facing his past and comes to a realization about a horrifying future.