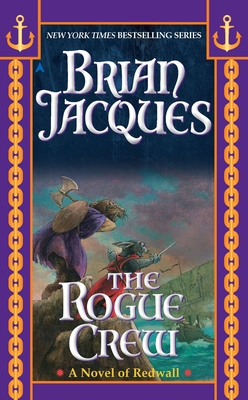 This is book number 22 in the Redwall series.

In his acclaimed and beloved Redwall series, New York Times bestselling author Brian Jaques "shows no signs of letting up or slowing down the action." (VOYA) Visit the gentle critters of Mossflower Wood with The Rogue Crew...

In which the brave hares of the Long Patrol team up with the fearless sea otters of the Rogue Crew to defend Redwall Abbey from the terror of both land and sea—the pirate Razzid Wearat…
Brian Jacques was both a master storyteller and a jack-of-all-trades. He lived the life of a sailor, actor, stand-up comedian, radio host, bobby, even a bus driver. He was the recipient of an honorary doctorate in literature from the University of Liverpool and a New York Times bestselling author of more than twenty-five books for younger readers, including the wildly popular Redwall series. Dr. Jacques was a lifelong resident of Liverpool, England.
Praise for the Redwall series

“A grand adventure story. Once the reader is hooked, there is no peace until the final page.” –Chicago Sun-Times

“Jacques’s effortless, fast-paced narrative gets its readers quickly hooked. He clearly loves this other world he has created—there’s a genius sense of involvement and care (lots of lovingly descriptive passages), as well as an overflowing, driving imagination.” –Birmingham Post

“Redwall is both an incredible and ingratiating place, one to which readers will doubtless cheerfully return.” –New York Times Book Review

“Only a churl would reject this morality play in fur.” –Kirkus Reviews

“Filled with the kind of vibrant storytelling that fans of Jacques have come to expect. His dialogue is lively and delightful to read aloud…so rich in detail that the sights and sounds and smells of the adventure pull the reader in.” –Grand Rapids Press (MI)

“A richly imagined world in which bloody battles vie for attention with copious feasting and tender romancing. Where males and females are heroes and warriors. Where the young triumph and the old endure. Where intelligence is as valued as strength and wit is frequently more important than size…[Jacques] continues to surprise and delight with intriguing plots and fresh faces.” –Cincinnati Enquirer

“The Knights of the Round Table with paws.” –The Sunday Times (London)