Basket of Plums Songbook: Music in the Tradition of Thich Nhat Hanh (Paperback) 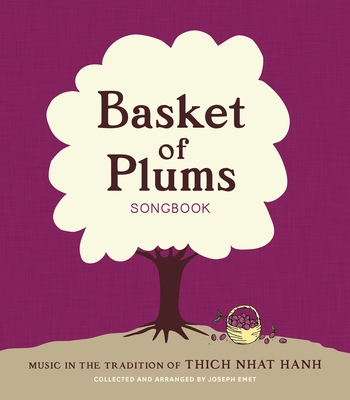 Basket of Plums Songbook: Music in the Tradition of Thich Nhat Hanh (Paperback)

By Joseph Emet (Compiled by), Thich Nhat Hanh (Foreword by)


Special Order—Subject to Availability
(This book cannot be returned.)
This songbook shares the songs of Plum Village, Thich Nhat Hanh's Community of Mindful Living in France. With traditional hymns and many of Thich Nhat Hanh's well-know poems set to music, along with original compositions by songwriter Joseph Emet, A Basket of Plums Songbook is a perfect way to learn about mindfulness. These songs are for walking, sitting, breathing, eating, gratitude, and enjoying the present moment. Whether you chose to listen, sing along, or play the music yourself these songs offer an opportunity to experience mindfulness wherever you are.
Thich Nhat Hanh was a world-renowned spiritual teacher and peace activist. Born in Vietnam in 1926, he became a Zen Buddhist monk at the age of sixteen. Over seven decades of teaching, he published more than 100 books, which have sold more than four million copies in the United States alone. Exiled from Vietnam in 1966 for promoting peace, his teachings on Buddhism as a path to social and political transformation are responsible for bringing the mindfulness movement to Western culture. He established the international Plum Village Community of Engaged Buddhism in France, now the largest Buddhist monastery in Europe and the heart of a growing community of mindfulness practice centers around the world. He passed away in 2022 at the age of 95 at his root temple, Tu Hieu, in Hue, Vietnam.