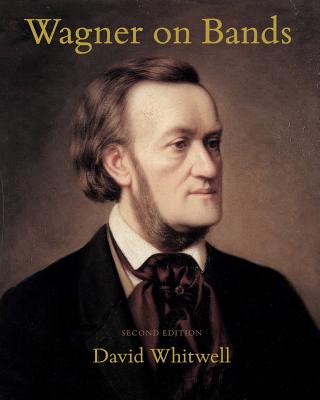 
Not On Our Shelves—Ships in 1-5 Days
(This book cannot be returned.)
Wagner was present for the birth of the modern conductor, living and working during the period when the idea of a conductor evolved from a man sitting at the first violin desk setting tempi to the present role of one who personifies the composer's ideas. Because Wagner was also working as a conductor during these transformational years, his letters and the newspaper articles he wrote are filled with a wide perspective of the world of the conductor. In this book we have pulled together his views on The Conductor as a Man, The Education of the Conductor, The Ethics of Conducting and The Art of Conducting. In addition the book contains much information about his own experiences with bands and the complete background of his compositions for band. Here the reader will find the full story of the Trauermusik, including the speech Wagner gave at the first performance, and the details of the performance of the Huldigungsmarsch at the ground-breaking ceremonies of the opera house at Bayreuth and the speech Wagner gave on that occasion.
Dr. David Whitwell is a graduate ('with distinction') of the University of Michigan and the Catholic University of America, Washington DC (PhD, Musicology, Distinguished Alumni Award, 2000) and has done post-graduate study at the University of Vienna and has studied conducting with Eugene Ormandy and at the Akademie fur Musik, Vienna. Prior to coming to Northridge, Dr. Whitwell participated in concerts throughout the United States and Asia as Associate First Horn in the USAF Band and Orchestra in Washington DC, and in recitals throughout South America in cooperation with the United States State Department. He is a past president of the College Band Directors National Association, a member of the Prasidium of the International Society for the Promotion of Band Music, and was a member of the founding board of directors of the World Association for Symphonic Bands and Ensembles (WASBE). In 1964 he was made an honorary life member of Kappa Kappa Psi, a national professional music fraternity. In September, 2001, he was a delegate to the UNESCO Conference on Global Music in Tokyo. He has been knighted by sovereign organizations in France, Portugal and Scotland and has been awarded the gold medal of Kerkrade, The Netherlands, and the silver medal of Wangen, Germany, the highest honor given wind conductors in the United States, the medal of the Academy of Wind and Percussion Arts (National Band Association) and the highest honor given wind conductors in Austria, the gold medal of the Austrian Band Association. He is a member of the Hall of Fame of the California Music Educators Association. Dr. Whitwell's publications include more than 127 articles on wind literature including publications in Music and Letters (London), the London Musical Times, the Mozart-Jahrbuch (Salzburg), and 39 books, among which is his 13-volume History and Literature of the Wind Band and Wind Ensemble and an 8-volume series on Aesthetics in Music. In addition to numerous modern editions of early wind band music his original compositions include 5 symphonies. David Whitwell was named as one of six men who have determined the course of American bands during the second half of the 20th century, in the definitive history, The Twentieth Century American Wind Band (Meredith Music). David Whitwell is one of nine men described by Paula A. Crider in The Conductor's Legacy (Chicago: GIA, 2010) as 'the legendary conductors' of the 20th century.