Whitman Illuminated: Song of Myself (Hardcover) 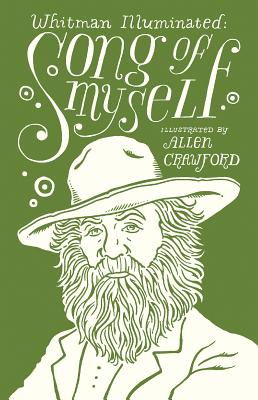 Whitman Illuminated: Song of Myself (Hardcover)

Whitman's most beloved poem, "Song of Myself," illustrated, illuminated, and presented like never before.

Walt Whitman’s iconic collection of poems, Leaves of Grass, has earned a reputation as a sacred American text. Whitman himself made such comparisons, going so far as to use biblical verse as a model for his own. So it’s only appropriate that artist and illustrator Allen Crawford has chosen to illuminate—like medieval monks with their own holy scriptures—Whitman’s masterpiece and the core of his poetic vision, “Song of Myself.” Crawford has turned the original sixty-page poem from Whitman’s 1855 edition into a sprawling 234-page work of art. The handwritten text and illustrations intermingle in a way that’s both surprising and wholly in tune with the spirit of the poem—they’re exuberant, rough, and wild. Whitman Illuminated: Song of Myself is a sensational reading experience, an artifact in its own right, and a masterful tribute to the Good Gray Poet.

Walt Whitman (May 31, 1819 – March 26, 1892) was an American poet, essayist and journalist. A humanist, he was a part of the transition between transcendentalism and realism, incorporating both views in his works.

Allen Crawford is an illustrator, designer, and writer. He and his wife Susan are proprietors of the design/illustration studio Plankton Art Co. Their most notable project to date is the collection of 400 species identification illustrations that are on permanent display at the American Museum of Natural History’s Milstein Hall of Ocean Life. Under his pseudonym, Lord Breaulove Swells Whimsy, he wrote, designed, and illustrated The Affected Provincial’s Companion, Volume One, which was optioned for film by Johnny Depp’s production company, Infinitum Nihil. He lives in Mt. Holly, NJ.
For This Book...
Staff Pick