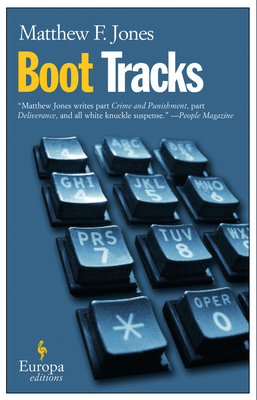 
Special Order—Subject to Availability
Charlie Rankin has recently been released from prison, but prison has not released its grip on him. He owes his life to "The Buddha," who has given him a job to do on the outside: he must kill a man, a man who has done him no harm, a man he has never met. Along the road to this brutal encounter, Rankin meets Florence, who may be an angel in disguise or simply a lonely ex-porn star seeking salvation. Together they careen towards their fate, taking the reader along for the ride.

Boot Tracks is a commanding tale of a man and woman struggling against a destiny they cannot control, told in Matthew F. Jones's characteristically taut, economic style. An assassination gone terribly wrong; a couple searching for one last chance to find a safe place in a hostile world. With these elements Jones weaves a harrowing tale of suspense, violence, and compassion.
Matthew F. Jones is the author of the novels Deepwater, The Elements of Hitting, A Single Shot, Blind Pursuit, and The Cooter Farm, each critically acclaimed. His novel Deepwater, named by critics as one of the best novels of 1999, was made into a film starring Lucas Black, Peter Coyote, and Lesley Ann Warren. He lives with his family in Charlottesville, Virginia.
Praise for Boot Tracks

"Brilliantly chilling. A nightmare thriller with the power to haunt."—Kirkus Reviews (Starred Review)

"An artful novel enlivened by some of the best low-life dialogue this side of Elmore Leonard."
—Patrick Andersen, The Washington Post

"Superlatives have been sapped of their meaning by overzealous critics, and somehow it sounds fake to say that a book is one of the "best things" you've "read all year." It's just that, sometimes {as in the case of Matthew F. Jones's "Boot Tracks"} that happens to be true. I haven't read something that made me empathize with a bad guy this intensely since I read "In Cold Blood" in high school."
—Katie Haegele, The Philadelphia Inquirer

"The sense of horrible inevitability is almost overpowering here. If only Jean-Pierre Melville (Bob le Flambeur) were still alive to make the movie version."—Bill Ott, Booklist