From Bear Rock Mountain: The Life and Times of a Dene Residential School Survivor (Paperback) 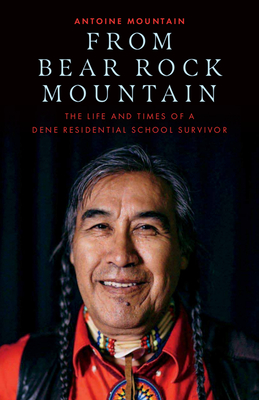 From Bear Rock Mountain: The Life and Times of a Dene Residential School Survivor (Paperback)

In this poetic, poignant memoir, Dene artist and social activist Antoine Mountain paints an unforgettable picture of his journey from residential school to art school--and his path to healing.

In 1949, Antoine Mountain was born on the land near Radelie Koe, Fort Good Hope, Northwest Territories. At the tender age of seven, he was stolen away from his home and sent to a residential school--run by the Roman Catholic Church in collusion with the Government of Canada--three hundred kilometres away. Over the next twelve years, the three residential schools Mountain was forced to attend systematically worked to erase his language and culture, the very roots of his identity.

While reconnecting to that which had been taken from him, he had a disturbing and painful revelation of the bitter depths of colonialism and its legacy of cultural genocide. Canada has its own holocaust, Mountain argues.

As a celebrated artist and social activist today, Mountain shares this moving, personal story of healing and the reclamation of his Dene identity.