Making Australia Right: Where to from Here? (Paperback) 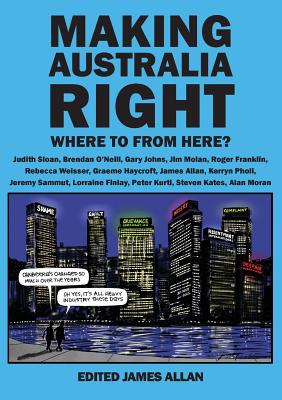 Making Australia Right: Where to from Here? (Paperback)

What you will find is a variety of treatments on some of the most important issues facing this country. True, the overall tone is not one of bubbling optimism. How could it be with the current state of the Liberal Party in this country? But it does constitute, with the variety of views and approaches of the authors, a sort of handbook for how the right side of politics might get back on track in this country - at least for those of us who do not think that acting as the pale imitation of Labor is the way to go.

The line-up for this book is as follows. Judith Sloan considers the economy; Brendan O'Neill tackles political correctness; Gary Johns writes on inequality; Jim Molan surveys defence; Roger Franklin goes more big picture and explains the causes for his anger at the Liberal Party; Rebecca Weisser examines the media in this country; Graeme Haycroft does the same with industrial relations; James Allan at the state of play in our universities; Kerryn Pholi writes on Aboriginal Australia; Jeremy Sammut discusses health; Lorraine Finlay takes on law-making; Peter Kurti delves into religion and the new sectarianism; Steve Kates scrutinizes interest rate policy; and Alan Moran finishes the collection off by looking at energy policy. So fourteen chapters in all, and each one approached in a different way.

What you have here are top people in their fields giving you something you will not find on the ABC, namely an outlook and an analysis that is something other than the bog-standard left-wing perspective that dominates so much of the airwaves, the newspaper columns, what you find on social media - and these days, alas, even what some Liberal MPs will voice inside the party room.

-- James Allan, from the Introduction