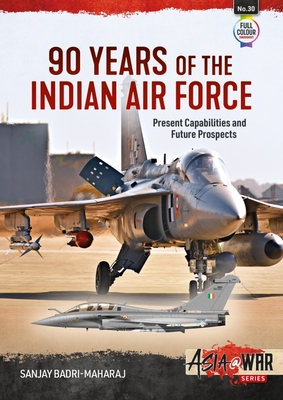 
Not On Our Shelves—Ships in 1-5 Days
The Indian Air Force was formed on 8 October 1932. Tested in the Second World War and in subsequent India-Pakistan conflicts, the force enters its 90th year as one of the largest air forces in the world. However, it also faces enhanced challenges in the region as it seeks to replace legacy systems, upgrade its combat and support assets and to also expand its force levels. Despite many problems the IAF is facing the second decade of the twenty-first century with an increasingly rationalized doctrine, an improving air defense network, an array of new ordnance and electronics and a rejuvenated combat fleet.

90 Years of the Indian Air Force examines the Indian Air Force as it exists today and its moves towards modernization. Each element of the IAF, along with the current inventory of aircraft as they relate to its combat squadrons, transport fleet, helicopter forces, training and electronic warfare and surveillance assets are discussed. In addition, the IAF's air defense network and its large SAM inventory are detailed along with the fledgling Defence Space Agency which operates with Air Force assistance. India's existing space assets are discussed as they relate to airspace surveillance and management.

The ongoing modernization of the Indian Air Force is examined in terms of new acquisitions and the upgrading of older but viable platforms. Similarly, the ongoing efforts to improve the Air Defence network, ISTAR systems, AEW platforms and new SAMs are analyzed. Moreover, the focus on indigenous designs in respect of radars, aircraft, ordnance and SAMs are explored in detail. Two separate elements of this effort are discussed; license production of foreign designs and a renewed emphasis on local designs for combat aircraft, trainers, helicopters, weapons and SAMs, this local production being key to the IAF's future modernization.

90 Years of the Indian Air Force is illustrated with full color photography throughout and includes 15 specially commissioned color artworks.