The Italian Wars: Volume 4: The Battle of Ceresole 1544 - The Crushing Defeat of the Imperial Army (Paperback) 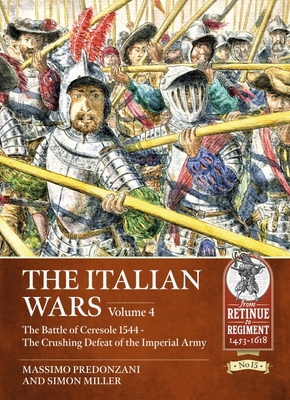 The Italian Wars: Volume 4: The Battle of Ceresole 1544 - The Crushing Defeat of the Imperial Army (Paperback)


Backordered
April 1544: The French army led by Charles of Bourbon Count of Enghien - deployed in the siege of Cairignano, a city occupied by the imperials - was ordered to fight Alfonso d'Avalos Marquis of Vasto, the hated Imperial rival.

After almost twenty years from the legendary Battle of Pavia, the two most powerful European States faced each other again in battle. On one side, French and Swiss. On the other side, Imperials and the dreaded Landsknechts.

The memory of the carnage of the Black Bands and Swiss soldiers is still vivid in the Swiss veterans' minds. On Easter day 1544, the two armies engaged in battle but the outcome remained unclear. The day after, however, the men led by Bourbon seemed to prevail. The Imperial cavalry was defeated by the French - who demonstrated again their bravery.

The initial success of the Spanish infantry was soon jeopardized by the gruesome clash between the Imperial square formations and the Swiss. The Enfants perdus detached from the Swiss square and massacred the enemy with their halberds with a flank attack. A wrong maneuver of the Imperial cavalry broke their companions' formation and signed the Imperial defeat. Hundreds of Landsknechts died under French's and Swiss' pikes with only a few survivors. At the end of the day, Bourbon and his men are victorious.

For how glorious this battle was, its outcome changed little to nothing in the power balance of Italy. Thus, the French crown regarded it as a secondary victory.