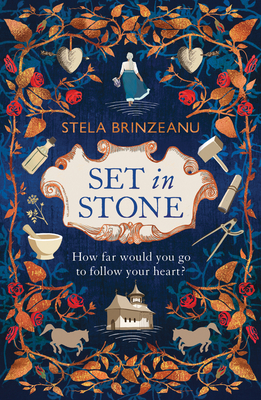 
Coming Soon—Pre-Order Now
"A lush page-turner about two women who fight for their futures in a patriarchal society" —Janet Skeslien Charles, author, The Paris Library

"Storytelling at its best" —Ellen Keith, author, The Dutch Wife

But this is a world where a woman’s role is defined by religion and class. To make a life together means defying their families, the law, and the Church. The closer they become, and the more they refuse the roles assigned to them, the more sacrifices they have to make. While Mira’s rebellion puts her life in the gravest danger, Elina must fight to change her legal status to "son" so she can inherit her father’s land and change their destiny.

Set in Stone delves into the past to uncover a story which is just as relevant today: the desire to forge your own path while constantly having to resist a patriarchal fear of women’s strength – and how ultimately love can help you choose your own truth.

Stela Brinzeanu moved to London at the age of eighteen. With a BA in Media Studies from the University of Westminster, she embarked on a brief journalistic career, training with the BBC and running a community magazine, before she turned her attention to literature. Her fiction explores issues of identity, gender roles, the unity and inter-connectedness of nature, and the conflict of religion – organized religion – vs spirituality.