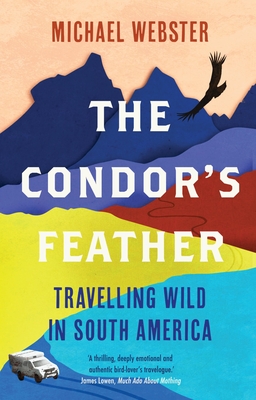 'A thrilling, deeply emotional and authentic bird-lover's travelogue.' James Lowen, author of Much Ado About Mothing

'One spring morning, as the cuckoos were arriving in England, we departed. At Tilbury Docks we slowly edged our Toyota camper into a shipping container and, like a heron scooping a frog from a marsh, our container was hoisted high over the dockside. Inside was everything we needed, our new life bound for South America.'

After a vicious attack left Michael Webster in treatment for years, it was only his love of nature - in particular birds - that truly healed. Repaying this debt to nature, he and his wife embarked on their trip of a lifetime, travelling through South America; immersed in the wild, following and filming birds.

For over four years Michael and Paula travelled the length of the Andes, the greatest mountain chain on Earth. From penguins in Patagonia, up beyond the hummingbirds of the equator, to the flamingos of the Caribbean. They endured dust storms, thundering gales, icy mountain tops and skin-searing heat, and tested the limits of their physical and mental strength as they lived wild, month after month, camping under galaxies of diamond stars.

The Condor's Feather is testament to the possibility of new adventures, new friendships and new hope.

Michael Webster is passionate about the natural world. He is a conservationist, birdwatcher and wildlife filmmaker, and throughout his life has encouraged others to share his love of nature. Michael enjoys the excitement of photographing and filming in wild lands. He is among the few people to have accessed Iran to record bird migration across the Caspian Sea. Travelling independently, he has slept alone with African elephants, tracked lemurs in Madagascar and filmed tigers in India. During their nearly five years in South America, Michael and his wife, Paula, were the first to film the incredible courtship 'dance' of the critically endangered hooded grebe. The footage from their film Tango in the Wind had 50 million views on social media and was bought by National Geographic, becoming their second most popular video of 2018. Michael is also the author of Birds of Charnwood, described by Sir David Attenborough as a splendid book.Lecturing all over Great Britain on bird conservation and adventure travel, as well as being a regular speaker at the annual British Birdwatching Fair, Michael can also be found on Facebook at 'Living Wild in South America'.