The Italian Wars: Volume 3 - Francis I and the Battle of Pavia 1525 (Paperback) 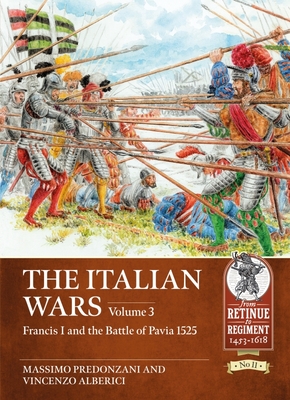 The Italian Wars: Volume 3 - Francis I and the Battle of Pavia 1525 (Paperback)


Special Order—Subject to Availability
In the early hours of the 24th of February 1525, under the walls of the city of Pavia, the best Imperial fought against one of the largest French armies every to have invade the Italian states. Armies led by the young Francis Ist of France and the Emperor Charles Vth fought for the coveted prize of the Duchy of Milan. By the end of the fighting, the renowned Black Legion had been wiped out and the cream of the French Heavy Cavalry had been destroyed, by the massed ranks of drilled and disciplined Spanish arquebusiers. The French King and many of his nobles were prisoner of the enemy.

Seen as one of the most significant battles in history, Pavia was to be the decisive battle of what became known as the Italian Wars, a series of conflicts that for almost thirty years raged the length of the peninsula, fought by Europe's most powerful states.

The defeat of the French Gendarmes at Pavia would signal the end of the dominance of heavy cavalry on the battlefield and the rise of the professional infantry soldier using increasingly proficient firearms in ever greater numbers.

In this third volume of the series, the events that led to the decisive battle of Pavia, from the Peace of Noyon in 1516 to the fateful day are examined. The phases of the battle have been reconstructed and described in detail, comparing the many and varied accounts, whilst the site of the battle is examined for evidence of the fighting.

The armies and troops that fought at the battle are also examined in detail, as are their leaders.

The authors also devote an important section of the book to the heraldry of the armies. Coats of Arms, heraldic devices and flags the colors used are examined and reconstructed from original images and French, Spanish, and Italian sources. The culmination of this groundbreaking research is the creation of 8 specially commissioned original color plates depicting the clothing, equipment, flags and heraldic devices of the armies at Pavia.