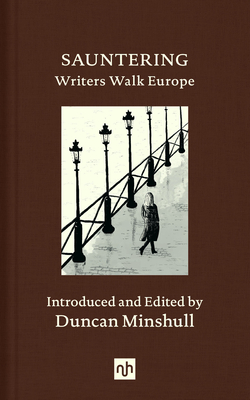 
Not On Our Shelves—Ships in 1-5 Days
This latest collection of walking literature from Notting Hill Editions celebrates the allure of the Continent.

On foot the world comes our way. We get close to the Continent’s alpine ranges, arterial rivers, expansive coastlines. Close to its ancient cities and mysterious thoroughfares; and close to the walkers themselves—the Grand Tourers and explorers, strollers and saunterers, on their hikes and quests, parades and urban drifts.

"Here is an odd development: I have decided to carry a book. For at least the coming season, when, with hope, we head out once again for afternoon or evening walks, I want this book with me. I plan to open it, often, every day. Read one selection and you will smile. Read three and you’ll be lacing your boots… The genius of Sauntering is that it celebrates the act itself, the joy as well as pain of walking. There are narratives of sunny valleys as well as of frightening wartime trenches. The book has nothing to do with exercise and everything to do with a way of seeing.’
—Scott Olsen,  Minneapolis Star Tribune

“Sauntering is full of those free associations in place and space that are the very essence of walking pursued as a writerly act, and writing undertaken as an ambulatory art. The perfect companion for a summer ramble, or a winter fireside.” —Will Self

“A beguiling panorama of wanderers from different eras and geographies. . . Like his subjects, Minshull wanders, lifting contributions from people all over the literary map: philosophers, novelists, essayists, critics, children’s authors. . . . [His] goal, one gathers, is less to trace a historiography of the rambler than to expand the genre of flânerie, with an open-endedness true to its spirit.” —Alejandro Chacoff, The New Yorker