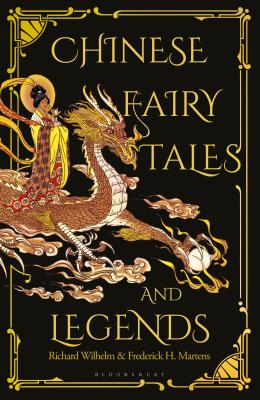 An elegantly packaged new edition of a classic Chinese folk tale collection that responds to the contemporary fascination with the ancient culture of the Far East.

This elegantly presented edition of Richard Wilhelm & Frederick H. Martens' classic collection of 73 Chinese fairy tales has been re-edited by a leading Chinese historian to heighten its appeal to the modern Western reader. As China continues to develop as an economic and political superpower, there has been a growing interest in its history and literature. China has a rich oral tradition and these stories, passed down through hundreds of years, not only enthrall and delight, but also cast light on the country's ancient culture.

Chinese folklore is as colourful and captivating as the Arabian Nights or the work of the Brothers Grimm or Hans Christian Andersen, yet the stories themselves remain largely undiscovered in the West. Written with economy and wit, the short, one- or two-page tales exhibit those distinct aspects of the Chinese character and approach to life which derive from the values of Taoism, Confucianism and Buddhism. These include moderation, the value of promises, respect for one's elders, justice and injustice, and the power of wisdom.

The stories are arranged thematically under headings such as nursery fairy tales, nature and animal tales, and myths. Some, such as the legend of the ghostly general and haunted battlefield, engage with the supernatural, while others are dramatic tales featuring flying ogres and cunning demons. Yet others introduce magical talking animals, dragons, endangered princesses, clever shepherd boys and divine figures, including the shape-shifting Yang Oerlang, Guan Yu, the god of war, and the Silkworm Goddess who has a horse's head.

Intriguing titles such as Why Dog and Cat Are Enemies, The Dragon Princess, The Maiden Who Was Stolen Away and The Bird with Nine Heads sit next to tales familiar to all Chinese children, including The Lady of the Moon and The Herd Boy and the Weaving Maiden.

Dr Richard Wilhelm (10 May 1873 – 2 March 1930) was a German sinologist, theologian, and missionary. He lived in China for 25 years and grew to love and admire the Chinese people. He is best remembered for his translations of philosophical works from Chinese into German that in turn have been translated into other major languages of the world.

"Move over Aesop! Lovers of fairy tales and folk legends will be delighted by this new collection of Chinese fairy tales … A great gift for any reader or to oneself." - San Francisco Book Review