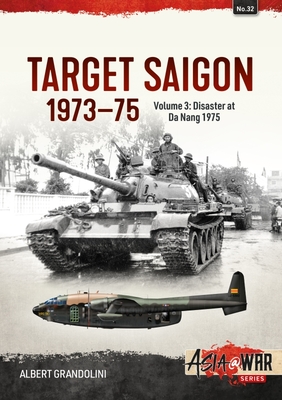 The third volume of the Target Saigon mini-series describes the opening stages of the final communist offensive against South Vietnam.

The decision of President Nguyen Van Thieu to evacuate the Central Highlands was part of a wider scheme that envisaged an extensive redeployment of South Vietnamese forces and led to the abandonment of nearly half of the country. Panic inevitably spread among the population and the armed forces and set into motion a chain reaction that would see the complete collapse of the country. The United States refused to intervene again despite the situation spiraling out of control. Thieu had played and lost.

The third volume of Target Saigon details the disastrous evacuation of Hue and Da Nang, as well as the delaying actions fought in the central coastal area and is illustrated with a wide range of contemporary photographs and a number of specially commissioned full color artworks of the vehicles, soldiers and aircraft that fought in this campaign.