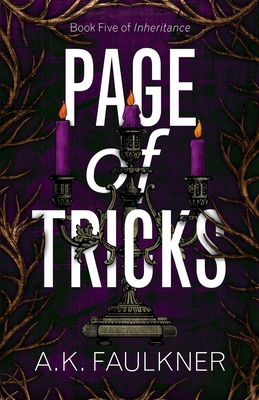 This is book number 5 in the Inheritance series.

The more Quentin discovers about his powers--and his past--the worse his mental health gets. Laurence would do anything to help him, he just needs the time. But time isn't on their side: Quentin's father, the Duke of Oxford, is still out there. Hunting for Quentin. And he's getting impatient.

Impatient enough to have Laurence kidnapped and brought to London, where the Duke plans to have Freddy do everything in his considerable telepathic power to break Laurence...and force Quentin's hand.

But Freddy is only doing what he has to do to save his lover. Can Quentin find the strength to do the same in time to save Laurence?

Page of Tricks is the conclusion to Season One of the Inheritance series. Don't miss Season Two, which begins with Rites of Winter.