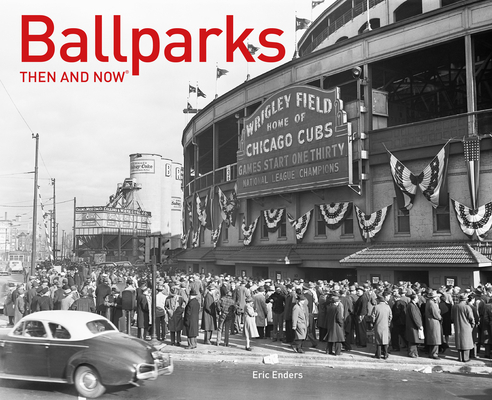 
Not On Our Shelves—Ships in 1-5 Days
Ballparks Then and Now is a fascinating exploration of ballparks across America. Packed with archival and modern photography, this book documents the development of America's national pastime by looking at the fields of dreams on which it is played.

The ballpark experience has changed dramatically from baseball's early days on grassy lots with wooden grandstands and free admission. The Union Grounds in Brooklyn, New York, is considered by many to be the first ballpark ever built, when William Cammeyer converted the Union Skating Pond in 1862.

Ballparks Then and Now traces the evolution of stadiums used by all the MLB teams today. Organized alphabetically they range from Anaheim and Atlanta to Toronto and Washington. Ballparks grew in size and grandeur from wooden bleachers and stands that often perished in ferocious fires (Boston, Cincinnati) to the concrete cookie-cutter ballparks of the 1960s and 1970s (Philadelphia, Pittsburgh). These multi-sport stadiums have now been replaced by modern retro designs (Yankees, Mets) that give each park its own unique feel. Batting far into the 9th are the carefully updated historic ballparks (Redsox, Cubs) nested in the heart of their communities.
Eric Enders is a baseball historian and freelance writer whose work has appeared in the New York Times and other publications. The first ballpark he fell in love with was Dudley Field, where he attended minor league games as a child in El Paso, Texas. A lifelong Dodgers fan, he has been to many of the ballparks featured in this book. He is a former researcher at the National Baseball Hall of Fame Library and the author of the Play Ball! Baseball Scorebook. He lives in Cooperstown, New York.