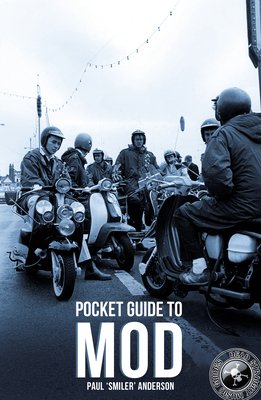 
Not On Our Shelves—Ships in 1-5 Days
Mod has its roots in in London with a group of young men in the late Fifties who were known as modernists because they listened to modern jazz. Mod culture included fashion, music, motor scooters, and amphetamine-fuelled all-night dancing. During the early to mid 1960s, as mod grew and spread throughout England, certain elements of the mod scene engaged in clashes (often in traditional southern seaside resorts on bank holidays) with gangs of rival rockers. A Pocket Guide to Mod covers fashion including the use of the Union Flag and RAF roundel; music including bands such as The Who, Small Faces and Yardbirds who were associated with the music and locations such as The Eel Pie Island Hotel at Twickenham near London; amphetamines, the mod drug of choice that fuelled marathon all-night dancing; and scooters including Vespas and Lambrettas - often highly customised.