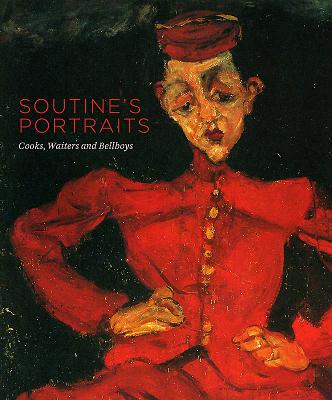 
Special Order—Subject to Availability
Accompanying a major exhibition at the Courtauld Gallery that focuses upon one of Chaim Soutine’s most important series of portraits – of cooks, waiters and bellboys – this is the first time that this outstanding group of masterpieces has ever been brought together. Chaim Soutine (1893–1943) produced some of the most powerful and expressive portraits of modern times. His ability to capture in paint the character, humanity and emotion of his sitters is the hallmark of Soutine’s greatest work. The major exhibition at the Courtauld Gallery, London, focuses upon one of his most important series of portraits; his paintings of cooks, waiters and bellboys who sat for him in Paris and the South of France during the 1920s. These works helped to establish Soutine’s reputation as a major avant-garde painter, seen by many as the twentieth century heir to van Gogh. This will be the first time that this outstanding group of masterpieces has ever been brought together and it will be the first exhibition of Soutine’s work in London for over thirty years. Soutine arrived in Paris as an émigré from Russia in 1913 and began a precarious existence as a penniless artist in Montparnasse living among fellow painters, such as Marc Chagall and Amedeo Modigliani. As part of this avant-garde coterie of artists, Soutine developed a highly original style that combined an expressive handling of paint with deep reverence for the Old Masters that he studied in the Louvre. His portraits often appear both timeless and vividly modern. These qualities are exemplified by the series of paintings of cooks, waiters and bellhops that he produced during the 1920s. These lowly and often-overlooked figures from Paris’s fashionable hotels and restaurants, including the famous Maxim’s, appealed to Soutine’s sense that profound emotion and a deep sense of humanity could be found in such humble sitters. The contrast between their working uniforms and the individuality of their faces adds to the emotional charge of these extraordinary portraits. Soutine strived to achieve the most powerful effects of color from the bold whites, reds and blues of their different uniforms. When he started the series, Soutine was living in near-poverty as a struggling artist. These portraits helped to lift him out of these desperate circumstances as they were soon admired by friends and become prized by collectors. Today, they are considered among his greatest achievements. This publication will bring together the most comprehensive group of these portraits. It will be a unique opportunity to experience the power and profound emotion of Soutine’s art.
Karen Serres is curator of paintings at the Courtauld Gallery in London.

Barnaby Wright is the Daniel Katz Curator of Twentieth-Century Art and deputy head of the Courtauld Gallery in London.