The Beer Bucket List: A travel-sized guide to over 150 of the best beer experiences on the planet (Hardcover) 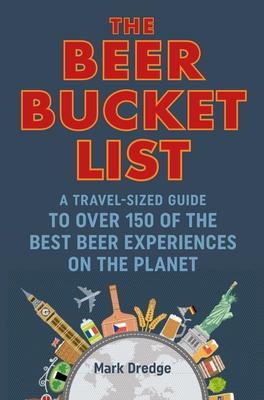 The Beer Bucket List: A travel-sized guide to over 150 of the best beer experiences on the planet (Hardcover)


Not On Our Shelves—Ships in 1-5 Days
Join award-winning beer writer Mark Dredge on his search for the world’s best beer adventures and experiences.

This collection of over 150 unmissable beer experiences features the world’s greatest beers, bars, breweries, and events: it’s the ultimate bucket list for every beer lover. Combining travel, city guides, food, and history, The Beer Bucket List takes you around the globe, via traditional old British pubs, quirky Belgian bars, brilliant Bavarian brauhauses, spots to enjoy delicious food and beer, the hop gardens of New Zealand, Southeast Asia’s buzzing streets, amazing beer festivals, unique beer styles, pioneering breweries, and the best new craft brewers. This is any beer lover’s must-read book about the most essential beer experiences on the planet.
Mark Dredge is an award-winning beer, food, and travel writer from London, England. In 2011, 2013, and 2014, he was awarded Beer and Food Writer of the Year from the British Guild of Beer Writers for the work on his blog Pencil and Spoon and then his first two books, Craft Beer World and Beer and Food, which also won an award from the North American Guild of Beer Writers. Mark has also written The Best Beer in the World, Cooking with Beer, and The Beer Bucket List for Dog 'n' Bone, and his writing has featured in leading publications across the globe; he’s also an international beer judge. You can follow him on Twitter and Instagram: @MarkDredge.
With more than 150 beer recommendations, it will give any beer-lover some great travel ideas. – Womansday.com

“A thorough list of hops-focused information, including a list of the best drinking spots around the globe.” – Cosmopolitan.com