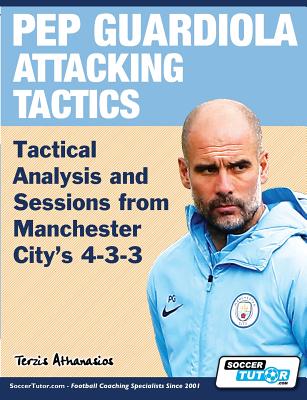 This book provides a tactical analysis of Pep Guardiola's 4-3-3 Attacking Tactics (56 Tactical Situations) for you the coach to learn from one of the best coaches in the world.

Athanasios Terzis is a UEFA 'A' Licence Coach and has used this analysis to produce 12 Full Training Sessions (70 Practices and Variations). You can use these ready-made sessions to practice Pep Guardiola's attacking tactics and implement them into your training sessions.

The aim of the book is to use the innovative attacking tactics of Pep Guardiola to create chances and score goals, with variations depending on the opposition players' positioning and reactions within their formation (4-4-2, 4-2-3-1, 4-3-3 and teams with a back 5).

Pep Guardiola's Manchester City used these attacking tactics to become the Best Ever Premier League Team during the 2017/2018 and 2018/2019 title winning seasons, breaking the following records: