North Face: A Deadly Earthquake in the Himalaya. a Climber Trapped High on Everest. an Epic Rescue Attempt Is about to Begin. (Everest Files #2) (Paperback) 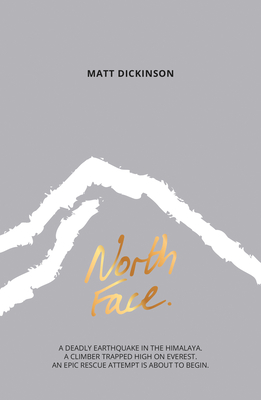 North Face: A Deadly Earthquake in the Himalaya. a Climber Trapped High on Everest. an Epic Rescue Attempt Is about to Begin. (Everest Files #2) (Paperback)

This is book number 2 in the Everest Files series.

Ryan Hart is an 18-year-old adventurer on a mission. To get himself to Mount Everest and check out the truth about the world's highest peak. Friends have told him dark stories about the mountain, outrageous things that he wants to see for himself.

Just a few hours after Ryan arrives at Everest Base Camp a lethal earthquake strikes. Avalanches pound the glacier, burying Ryan's climbing buddy and killing many others. A desperate rescue saves Ryan's friend, but only after a local Tibetan girl Tashi helps with the search.

Stress levels are running high among the climbing teams. The mountain is shut for the season because it is judged too dangerous.

Then a flashlight reveals a clue. Someone is alive, high on Everest's treacherous north face

Tashi is convinced it is her 15-year-old brother.

Ryan is prepared to risk everything to help.

Storm clouds gather as they set out on their illegal climb, a do-or-die mission which the local militia will do anything to stop.

Matt Dickinson is an award-winning writer and filmmaker with a passion for climbing and adventure. During his filmmaking career he has worked as a director/cameraman for National Geographic television, the Discovery channel, the BBC and Channel 4. His film projects have taken him to Antarctica, Africa and the Himalaya, often in the company of the world's leading climbers and expeditioners. His most notable film success was Summit Fever, in which he reached the summit of Everest via the treacherous North Face. His book The Death Zone tells the true story of that ascent and has become a bestseller in many different countries.Matt is currently writer in residence for the Larus Trust and he continues to climb and explore. In January 2013 he summited Mount Aconcagua, which, at 6,965 metres, is the highest peak in the world outside the Himalaya. In 2016, and again in 2017, he was back on Everest as a writer in residence, and he is planning an ascent of Denali in Alaska, one of the 'seven summits'.Recently Matt has started writing fiction for teenage readers. His debut thriller series Mortal Chaos was well received by critics and readers alike. Matt has followed this up with the Everest Files, a dramatic and popular trilogy set on the world's highest mountain. Lie Kill Walk Away is his latest teen thriller. When he's not writing, Matt tours the UK, speaking at schools and colleges and inspiring a new generation of adventurers.