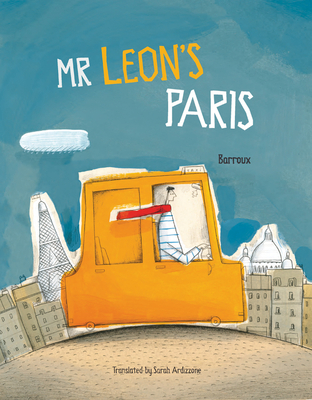 Mr Leon, a Parisian taxi driver of many years, spends his days ferrying colorful characters to designations corresponding to his passengers’ personalities and nationalities. From behind the wheel of his little yellow taxi, Mr Leon travels the world, from the North Pole to the Eiffel Tower to the Congo. Until that is, Mr Leon decides it's time to explore the real places after which the streets in Paris are named. After putting his taxi up for sale, Mr Leon sets sail for Liberty Street and beyond. This is only the beginning of Mr Leon's world adventures!

Barroux is an established and popular illustrator in France, the United States, and Canada. He has worked as a press illustrator for the New York Times, Washington Post, and Forbes Magazine. Sarah Ardizzone is an award winning translator.  She won the Marsh Award for Children's Literature in Translation in 2005 and 2009, as well as the Scott Moncrieff Prize in 2007.  Her translations include Toby alone, Just Like Tomorrow, Eye of the Wolf, My House, Little Prince, and School Blues.

"Paris is beautifully rendered in moody beige, blue and orange in this retro-styled tale. . . . A sophisticated and stylish picture book to be savoured again and again."  —Booktrust

"A sophisticated and wonderfully amusing creation which will appeal to people of different ages."  —Books For Keeps