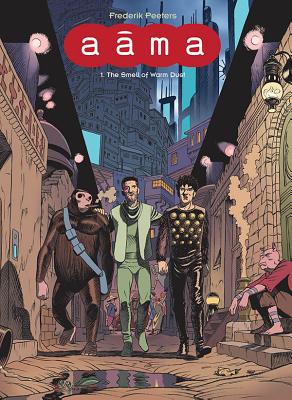 
Special Order—Subject to Availability
In the distant future, Verloc Nim wakes up in the middle of nowhere suffering from complete amnesia. He remembers nothing of his former life. But when Verloc is handed his diary by a robot-ape called Churchill, he is able to revisit his past. His life, he discovers, has been a miserable one. He lost his business, his family, and his friends because he refused the technological advancements of society. The eye implants, the pharyngeal filters, the genetic modifications—he went without all these. He was astray in a society he deeply resented—that is, until his brother, Conrad, took him to another planet to retrieve a mysterious substance called aama. Full of action, adventure, and strange characters, Aama is a unique exploration of society’s dangerous relationship with technology.
Frederik Peeters as one of the world’s most important graphic novelists and the author of the highly acclaimed Blue Pills. He has received five nominations in the Best Book category at the Angoulême International Comics Festival; in 2013 he won the Best Series prize at the same event for the first two volumes of Aama. He lives with his wife and daughter in Geneva, Switzerland.
“What use does technology have if the end is nowhere in sight? What means will we concoct, day-to-day, to meet our end goal? Writer/artist Frederik Peeters plays with these themes and more in his Angoulême Festival–winning sci-fi chronicle, Aama.”
— Comic Book Resources