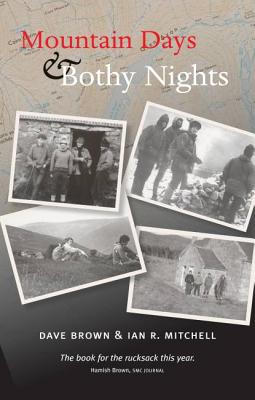 
Special Order—Subject to Availability
(This book cannot be returned.)
Acknowledged as a classic of mountain writing, this book takes you into the bothies, howffs and dosses on the Scottish hills as Fishgut Mac, Desperate Dan and Stumpy the Big Yin stalk hill and public house, evading gamekeepers and Royalty.
Originally from Aberdeen, Ian Mitchell has lived in Glasgow for the past thirty years. Winner of the Boardman Tasker Prize for Mountain Literature for A View from the Ridge, historian Ian R. Mitchell gave up teaching to write full time. Ian's background in historical research, coupled with indepth personal experience of East Berlin in the 1980s, allows him to create an authentic historical novel. His previous exercise in historical fiction, Mountain Outlaw, was described by the renowned historian E J Hobsbawm as 'fascinating...a fine piece of work...more support for my ideas on social banditry.'DAVE BROWN started climbing in 1960, spending much of his formative years in the Trossachs, the Arrochar Alps and Glencoe, where he met some of the great characters of the early climbing scene. He worked for the Colorado Outward Bound School as a senior instructor and lator with the British Columbia Outward School. As well as articles in the climbing press, Dave has also co-authored (with Ian) the 1991 Boardman-Tasker Prize winning book of climbing tales, A View from the Ridge, recently re-published by Luath Press. IAN R. MITCHELL started climbing and walking in the cairngorms in the 1960s. He has an extensive knowledge of the Scottish mountains and has also scaled peaks in Iceland, Norway, the Pyrenees, Morocco and the Austrian Alps. Ian also broke free from a career in Further Education to pursue his dream of writing full-time. He is the author of eight books on mountain themes including Scotland's Mountains Before The Mountaineers (1998), for which he won the Outdoor Writer's Guild Award for Excellence, and On the Trail of Queen Victoria in the Highlands (2000), both published by Luath Press.