The Everest Files: A Thrilling Journey to the Dark Side of Everest (Paperback) 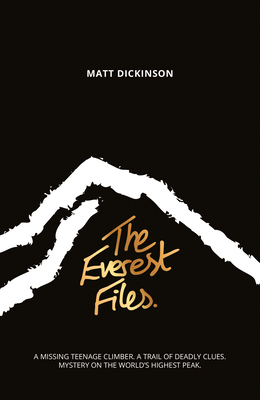 The Everest Files: A Thrilling Journey to the Dark Side of Everest (Paperback)

This is book number 1 in the Everest Files series.

The Everest Files: a thrilling journey to the dark side of Everest.

In the deepest Himalaya a story is spreading like wildfire. The story of an Everest expedition unlike any other.An expedition that ended with mysterious disappearances ... and death.

This is the mystery that eighteen-year-old Ryan Hart sets out to solve.

Ryan is on a gap year adventure, working for a medical charity in Nepal. When a local girl begs him to investigate why her sixteen-year-old friend Kami never came back from Everest, Ryan cannot resist the challenge.

A solo journey takes Ryan deep into the mountains where his detective work finally pays off. What emerges is a shocking tale of lies, betrayal and obsession.

All played out on the lethal slopes of the highest mountain in the world.

Little by little Ryan is falling under Everest's deadly spell.

Matt Dickinson is an award-winning writer and filmmaker with a passion for climbing and adventure. During his filmmaking career he has worked as a director/cameraman for National Geographic television, the Discovery channel, the BBC and Channel 4. His film projects have taken him to Antarctica, Africa and the Himalaya, often in the company of the world's leading climbers and expeditioners. His most notable film success was Summit Fever, in which he reached the summit of Everest via the treacherous North Face. His book The Death Zone tells the true story of that ascent and has become a bestseller in many different countries.Matt is currently writer in residence for the Larus Trust and he continues to climb and explore. In January 2013 he summited Mount Aconcagua, which, at 6,965 metres, is the highest peak in the world outside the Himalaya. In 2016, and again in 2017, he was back on Everest as a writer in residence, and he is planning an ascent of Denali in Alaska, one of the 'seven summits'.Recently Matt has started writing fiction for teenage readers. His debut thriller series Mortal Chaos was well received by critics and readers alike. Matt has followed this up with the Everest Files, a dramatic and popular trilogy set on the world's highest mountain. Lie Kill Walk Away is his latest teen thriller. When he's not writing, Matt tours the UK, speaking at schools and colleges and inspiring a new generation of adventurers.