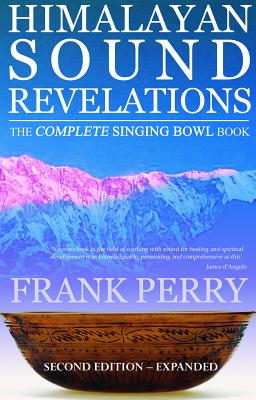 
Not On Our Shelves—Ships in 1-5 Days
Second, expanded edition of the 'bible' of Himalayan Singing Bowls and their sounds. Particularly useful is the wide scope of the book, which includes not just Tibetan and other bowls and the techniques used to sound them but Chinese bells, drilbu and ding-sha, the planets, elements and chakras, cymatics, overtones and partials, nada yoga, mantras, symbolism and astrology of the bowls, their relation to western music, Pythagoras and Newton, and the psychic integrity and true awareness of the bowl user. There is almost nothing that is not here. Although in the 1970s Frank Perry was one of the earliest practitioners of Himalayan Bowls his music has also been profoundly experimental, so that there are techniques in this book not to be found elsewhere alongside the clearest and most detailed analysis of how to 'play' the bowls, a combination which shows in Perry's bestselling albums Deep Peace and Celestial Harmonies. Not only can you sound your bowls and perform with them, you can understand their overtones and harmonics and thus appreciate the tradition from which they come and the subtle symbols and messages associated with them Frank's writing is also a revelation of his personal contact with living Himalayan Masters, his immersion in esoteric traditions and mysticism, and his understanding of other art forms such as the paintings of Nicholas Roerich, where he is an expert. He is the author many articles but this is his first book. As a musician he is widely mentioned in books on both percussion and improvisation, including those by Derek Bailey and Bettine and Taylor. He has recorded with Brian Eno and is an international performer familiar with both radio, television and modern media. Nonetheless he is in private a true ascetic, for whom the sound experience he is hearing and maybe creating is paramount. The second edition is expanded and corrected, with the addition of a chapter and a further appendix.