Outlaws of America: The Weather Underground and the Politics of Solidarity (Paperback) 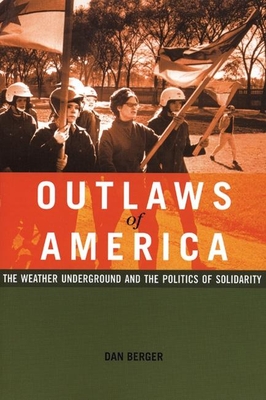 Outlaws of America: The Weather Underground and the Politics of Solidarity (Paperback)

"Dan Berger represents an emerging generation of radical activist scholars. A meticulously researched and well-referenced study of the Weather Underground. . . . A gripping story, drawing important lessons for the younger generation of activists."--Roxanne Dunbar-Ortiz, author of Outlaw Woman: A Memoir of the War Years, 1960-1975

Outlaws of America brings to life the motivations and actions of America's most famous renegades, who bombed their way into history. Through detailed and original research, Dan Berger offers a nuanced and compelling portrait of the group that risked everything in opposition to war and racism.

This explosive, engaging, and timely book uncovers the untold story of the Weather Underground, from its incendiary beginning to its tumultuous ending--never sparing a critical analysis of the group. Especially noteworthy is Berger's groundbreaking discussion of the infamous 1981 Brinks case, where former Weather Underground members allied with the Black Liberation Army in a failed robbery that resulted in the deaths of three men and the longtime incarceration of several activists.

Outlaws of America is published at a time of surging interest in the history of the group, immediately following the release of the Oscar-nominated documentary entitled The Weather Underground, of which Outlaws is the essential companion volume.

Dan Berger is a writer, activist, and PhD candidate at the University of Pennsylvania. A longtime anti-racism organizer, he is the co-editor of Letters From Young Activists (Nation Books, 2005).

Dan Berger is a writer, activist, and Ph.D. candidate at the University of Pennsylvania. A long-time activist, he is the co-editor of Letters From Young Activists (forthcoming: Nation Books, 2005). His writing has appeared in academic journals, activist publications, and Web sites across the country. He lives in Philadelphia.