All I Ever Wanted (Paperback) 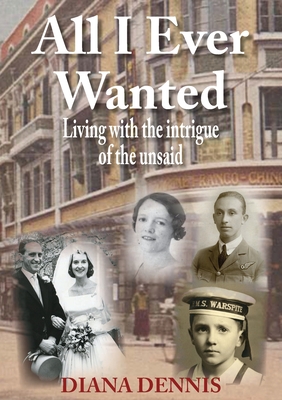 All I Ever Wanted (Paperback)

The loss Diana Dennis felt when her husband, Dick, died in 2007 was compounded by the realisation that she knew little of the man to whom she had been married for almost half a century, especially of his early formative years. Determined not to let bereavement distort her mind or her memory of the husband to whom she had been devoted, Diana researched Dick's family history.

The story that Diana was able to piece together is little less than extraordinary. It is typified by a scene on the steps of Raffles Hotel Singapore in 1946, which after the Japanese surrender the previous year had become a temporary transit camp for Allied prisoners of war. A young man dressed in the naval uniform of an able seaman stands at the bottom of the hotel steps. He watches a senior officer descend wearing a great deal of gold braid on his shoulders and salutes him. Recognition passes between them before slowly the young man realises the officer is his father. The sailor is Dick Dennis and he had only rarely seen his father since the age of twelve when he had sailed for England in 1939 from North China with his stepmother Virginia.

'All I Ever Wanted will take you along a fascinating journey across time and space. Diana Dennis uncovers a complex transnational history through the

lens of a unique personal story.'