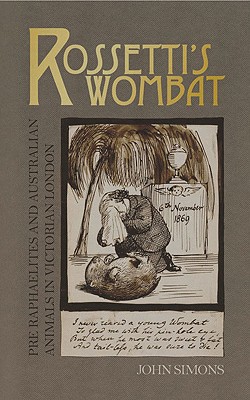 A light-hearted account of an improbable side of Victorian England, this history tells of the pet wombat owned by Pre-Raphaelite painter Dante Gabriel Rossetti and the late-19th century fad of owning Australian animals as pets. This examination also looks at the way a wombat participated in the delicate relationships between the men and women in the Pre-Raphaelite circle—particularly Rossetti’s emotional affair with Jane Morris, wife of his friend and colleague William. Fully illustrated with drawings and etchings of the period, this work will appeal to those with an interest in Victorian England, the Pre-Raphaelites, as well as wombat lovers the world over.

John Simons is a professor of English and the dean of the faculty of media, humanities, and technology at the University of Lincoln. He has published widely on subjects ranging from medieval chivalric romance to Andy Warhol.