How to Avoid Speaking (Paperback) 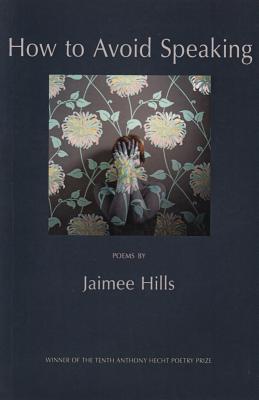 How to Avoid Speaking (Paperback)


Special Order—Subject to Availability
(This book cannot be returned.)
Poetry. HOW TO AVOID SPEAKING is the latest winner of the prestigious Anthony Hecht Poetry Prize, and was selected from almost 500 submissions by the English poet, editor, crtitic and anthologist, Anthony Thwaite. The collection is an exploration of speech, of sound and strange noises, which begins with the first confrontation with language and ends with a voice beyond the dead. It is a space where Brad Pitt becomes a 16th century anatomical drawing, where a Hemingway story melts under the threat of global warming, where Derrida agonizes over eating a Dorito. Through verse forms both innovative and traditional, Jaimee Hills's debut collection explores a philosophy of the awkward, and the memento mori, in an investigation of what it means to own a body and speak through it.Jaimee Hills is enviably gifted, exuberantly ingenious, smilingly audacious. Her language is, by turns, baroque, rococo, and precisely 'contemporary'... And it isn't only the language that is inventive and provocative, so is the syntax. She plays with constructions as well as with idioms and with vocabulary, and as you read you have to keep your wits about you, as she does... Not, I think, since William Empson in the late 1920s and 1930s has there been such a nimble trickster of a poet.--from Anthony Thwaite's forewordJaimee Hills welcomes us into a world where all things sing their tune and tuneful names: 'Diamond Dove, masked finfoot, tundra swan.silvereye, pink pigeon, rosy-faced lovebird.' What a harmonious uproar her mind must hear as it takes in continuous revelations of identity. In a series of persona poems, Wonder Woman tells all-and so do the letters M, D, F, and Z. Wit is one of her means of understanding, satire another, and admiration informs all her perceptions. HOW TO AVOID SPEAKING? Sing your heart out.--Fred ChappellJaimee Hills' poems are a conflagration of art, language, and sheer sensual excess, a fire in the brain and a heart that loves the world in all its multiplicity of beauty and menace. Birds soar, colors blaze, and her words rush in to capture it all. This is a dazzling collection.--Barbara Hamby.