Toronto at Dreamer's Rock and Education Is Our Rig: Two One-Act Plays (Paperback) 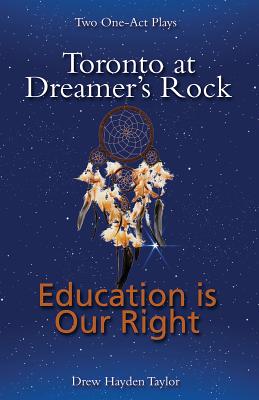 Toronto at Dreamer's Rock and Education Is Our Rig: Two One-Act Plays (Paperback)

In these two plays, Drew Hayden Taylor delves into the past and speculates about the future as he examines the dilemmas facing young Native Canadians.

Toronto at Dreamer's Rock is a moving portrayal of a teenage boy who is torn between the traditions of his people, which he only vaguely understands, and the lure of modern life. His magical encounters with two members of his tribe - one from 400 years in the past and one from the future - make him aware of how little he has thought about what it means to be an Indian.

Education is Our Right borrows from the familiar story of Charles Dickens' A Christmas Carol, but in this version the spirits of Education Past, Present and Future attempt to show the Minister of Indian Affairs the error of his ways.

Drew Hayden Taylor combines humour, passion, spirituality, and tough realism to create a hopeful vision of the future. Both plays have toured extensively to schools in Ontario and Quebec.

An Ojibway from the Curve Lake First Nations in Ontario, Drew Hayden Taylor has worn many hats in his literary career, from performing stand-up comedy at the Kennedy Center to being Artistic Director of Canada's premiere Native theatre company, Native Earth Performing Arts. He has been an award-winning playwright, a journalist/columnist, short-story writer, novelist, television scriptwriter, and has worked on over 17 documentaries exploring the Native experience.