The Song of the Forest (Paperback) 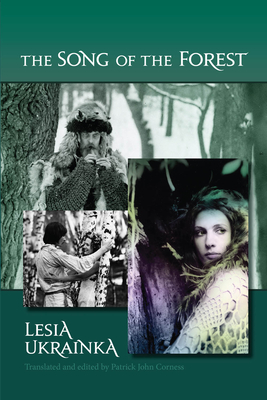 The Song of the Forest (Paperback)

Lesia Ukrainka was a Ukrainian poet, prose writer, and dramatist of universal importance. Her first collection of poetry, On the Wings of Song (1893), established her reputation as an accomplished lyrical poet. This collection contains her often-quoted poem "Contra spem spero" (Hope against Hope)--an expression of her remarkable strength of character and determination to face down a severe illness (tuberculosis of the bones) that afflicted her from an early age and caused her untimely death at the age of 42. Lesia Ukrainka wrote her masterpieces in the genres of drama and dramatic poetry, to which she turned her attention in the early 1900s. Many of her dramas were set in a variety of historical epochs, from those of ancient Greece and biblical Palestine to early modern Spain, eighteenth-century Muscovy, and the first Puritan settlers in America. Her most acclaimed play, The Song of the Forest (1911), is a symbolist fantasy drama in verse that evokes the neo-romantic concept of "living nature." Written in Kutaisi in the Caucasus two years before her death, it reflects Lesia Ukrainka's intense nostalgia for her native western Ukrainian region of Volhynia and her deep appreciation of the folkways, beliefs, and mythology of its countryside, where she grew up. In The Song of the Forest, Lesia Ukrainka expressed her deepest idealistic outlook, focusing on the contrast between good and evil, loyalty and betrayal, and highlighting the ideal of harmony between humans and nature and the importance of being a free, independent spirit. Patrick John Corness's meticulous translation of the play and his introduction and explanatory notes provide Anglophone readers with an opportunity to acquire a closer appreciation of this classic of Ukrainian literature.

Lesia Ukrainka (1871-1913) was the nom de plume of Larysa Petrivna Kosach-Kvitka, a Ukrainian poet, prose writer, and dramatist. Two of her most renowned works are her first collection of poetry, On the Wings of Song (1893) and her symbolist fantasy drama in verse, The Song of the Forest (1911). Patrick John Corness is Visiting Professor of Translation at Coventry University, England, and an award-winning literary translator with a wide portfolio of published translations from Czech, German, Polish, Russian, and Ukrainian.