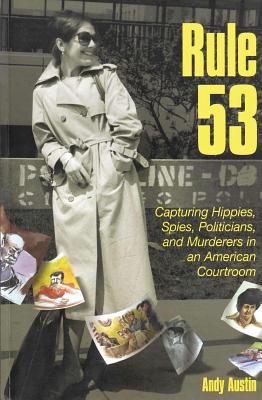 In 1969 artist Andy Austin pitched herself as a substitute for an ABC TV courtroom sketch artist who didn't show up to cover the Chicago 7 trial, thus beginning her career of more than 40 years of covering some of the city's and the nation's most notorious trials--all documented in this compilation. Rule 53 dictates no cameras allowed in the courtroom, so mobsters, politicians, spies, terrorists, gang members, and serial killers on trial leave their mark on history through the artist's renderings. This engaging memoir and firsthand account of how the drama of the courtroom stage really unfolds will delight history and true crime buffs, court watchers, and anyone fascinated by the nuances of character only an artist can capture.

In the late 1960s, new to Chicago and bored with the still life subjects she painted in her home studio, artist Andy Austin began wandering the city in search of surprises from life as it is really lived. Chicago delivered--with the color and drama of volatile times and larger-than-life subjects. The streets were alive with noisy demonstrations, against the war in Vietnam, and in support of issues ranging from civil rights to raises for schoolteachers. Austin sketched picket lines and protests and sometimes joined them, soaking up every detail with crystalline clarity. When she turned her skills to court drawing, her stunning ability to capture pivotal moments and revealing human interactions gave Chicagoans an unparalleled you-are-there view of trials and personalities that made headlines.

"Rule 53: Capturing Hippies, Spies, Politicians, and Murderers in an American Courtroom" is a vivid memoir by one of the country's best visual chroniclers of courtroom proceedings. Austin's gift for seeing essential details offers intimate glimpses of defendants like the Chicago 7 radicals, the Black Panthers and the El Rukns, serial killer John Wayne Gacy, and a parade of mobsters. In prose as deft and insightful as her sketches, she shares her portraits of the lawyers, judges, politicians, and others involved in cases she observed, salutes friends and colleagues, and shares personal experiences that influenced her unique perspective on local history in the making.

“Andy Austin does a remarkable job as a Chicago courtroom artist, and in her book, the truth comes through as vividly as in her sketches.”  —Studs Terkel

“For those who think they’ve seen and read everything about what goes on in court, here is a new perspective: the engaging, incisive, and consistently interesting view of renowned courtroom artist Andy Austin.”  —Scott Turow

“Gripping, beautifully written, Rule 53 is essential reading for anyone who wants to understand the tangled threads of the high-profile courtroom cases that have shaped our country’s direction for the last four decades. Andy Austin, as ABC’s Chicago courtroom artist, had a front row seat at every major trial from the 1969 Chicago 7 spectacle through Muhammad Salah’s recent acquittal on terrorism charges."  —Sara Paretsky

“I like Andy Austin’s quick mind and quick eye. She sees the drama, the humanity and, yes, even the humor in Chicago’s greatest theaters—its courtrooms. Her memoirs, beautifully illustrated, provide an amazing look at the inner workings of America’s most ebullient city.”  —Jon Anderson, Chicago Tribune

"Austin, a gifted courtroom artist with a clear eye and a fine ear, captures, in fast moving words, the compelling drama of big trial. No one has ever drawn a better courthouse portrait, in words and pictures, of the courtroom in action. The book should have been twice as long. Don't miss this."  — James B. Zagel, U.S. District Court Judge

"The sharp-witted courtroom sketch artist . . . has proven she's also a good reporter—penning a book crammed with drama and inside stories from the gritty world of criminal trials."  —Mike Robinson, Associated Press

"Austin uses more than illustrations to take readers on a historical tour of famous Chicago trials. She proves herself a sharp observer—a true reporter—whose neutral status in the courtroom gives her a singular relationship with many of the parties."  —Natasha Korecki, Chicago Sun-Times

"For years, Chicagoans have known Andy Austin as the brilliant courtroom artist whose sketches revealed not just the appearance of judges, lawyers, jurors, defendants, and plaintiffs but their characters. Now it turns out that this brilliance has concealed literary brilliance. It seems that while Andy Austin was sketching away, her intelligence and sympathy were penetrating the nature of what was happening in the courtroom, the essential character of those involved, their relationship to each other and to the complex world in which they functioned or malfunctioned. She has worked for years to bring all this into a book and here it is, a triumph of sympathetic intelligence that reveals more about human beings than many a fine novel and is at least as engrossing."  —Richard Stern, author