The Energy of Prayer: How to Deepen Your Spiritual Practice (Paperback) 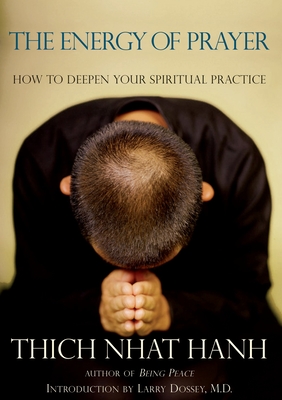 The Energy of Prayer: How to Deepen Your Spiritual Practice (Paperback)


Not On Our Shelves—Ships in 1-5 Days
In The Energy of Prayer Thich Nhat Hanh looks at the applications and effectiveness of prayer in Buddhist and other spiritual traditions and closely examines the question of why we pray. The Energy of Prayer introduces the reader to several meditation methods that re-envision prayer as an open, inclusive, and accessible practice that helps create healthy lives through the power of awareness and intention.

Life’s fast pace leaves little room for reflection and attention to the present moment. To seek relief from stress and pain, we often turn to consuming in order to forget our suffering, but we soon find that material wealth is not enough to bring true happiness, and always leaves us searching for something more. The Energy of Prayer shows how prayer and meditation can offer a beneficial way to reconnect with ourselves while satisfying the basic human need to make a connection with something larger than our everyday self. Whether used as a daily practice, during times of crisis, or to express gratitude prayer serves many functions, and does not need to be tied to a particular religious or spiritual affiliation to be effective.

Prayer has played an increasing role in the practice that Thich Nhat Hanh offers to his students. Rather than viewing it as dogmatic obligation, Buddhism views prayer as a form of energy, a way of communicating with one's higher self, one's ancestors, or one's God. Prayer is redefined not as being about asking some external force for what we need but about creating an internal environment in which it is easier to manifest positive outcomes in our lives.

The Energy of Prayer includes visualization and breathing exercises and concludes with a rich sampling of a broad range of prayers, chants and invocations from the Buddhist tradition.
Thich Nhat Hanh was a world-renowned spiritual teacher and peace activist. Born in Vietnam in 1926, he became a Zen Buddhist monk at the age of sixteen. Over seven decades of teaching, he published more than 100 books, which have sold more than four million copies in the United States alone. Exiled from Vietnam in 1966 for promoting peace, his teachings on Buddhism as a path to social and political transformation are responsible for bringing the mindfulness movement to Western culture. He established the international Plum Village Community of Engaged Buddhism in France, now the largest Buddhist monastery in Europe and the heart of a growing community of mindfulness practice centers around the world. He passed away in 2022 at the age of 95 at his root temple, Tu Hieu, in Hue, Vietnam.